Peddling is for losers!

Digging It at Stainburn – April. 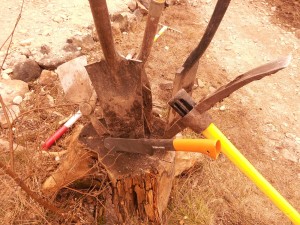 Lets not kid ourselves it’s been cold year so far. Dig days up until now have involved thermal layers and when we have swung a mattock into the frozen ground we’ve many times nearly blinded people with the shrapnel.  So it was a joy to get up on Sunday morning and find a clear blue sky waiting behind the curtains.  A quick breakfast, shove a sandwich, a boost bar, and a bowl for the dog in my bag, and then get my boots on the while the hound goes apoplectic with joy.  He knows the signs, its a day in the woods.

After weaving between the snow drifts that still litter the local roads like icebergs we (hound and I) take the traditional wander through the Norwood trails to burn off his energy and check the lie of the land.  Sadly the lie of the land is waterlogged, so we abort it early since the path to the trig point is pretty much one big lagoon from beginning to end, and we drive round to the Stainburn car park   There’s the usual chatting as people show up, and a few new faces make themselves known. It’s a good turnout, more than we’d expected and three first timers – always a nice surprise.  Slowly the chat focuses on tool selection, job list and then to wheel barrows and with full loads of aggregate off we trundle to the first job of the day.  Depositing the barrows on the descent line where a berm we built a little over a year ago is in serious need of resurfacing, We leave Dave and Nick to the inevitable process of obsessing over the perfect shape for a berm.  You can say it doesn’t matter, you can say you don’t care, but you’ll never be happy until it is just right, the perfect shape, the perfect curve, the perfect line.  We are SingletrAction, Volunteer Mountain Bike Trail Obsessive Perfectionists. 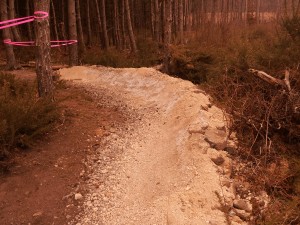 The only way not to succumb to this obsession is not to be there, so a small group of us retrace our steps back to the red return and start digging out some of the drainage ditches which either are, or will soon be causing problems.  Like our berm shaping counterparts we soon get carried away, if it is worth doing at all its worth doing properly.  And doing it properly also means not having to come back and do it again for a while.

Ninety minutes later we’re all coated in stinky bog water, but every drainage channel is now flowing not stagnating, and the boys down the hill have carved a thing of beauty from the trail surface they placed on a lumpy disheveled looking berm returning it to its former glory.  But its still a sunny and dry day and just a few fast corners by gnarley tyres will shred this new surface to bits, so we tape it off to wait for some rain to pack it down and move on down the hill*. 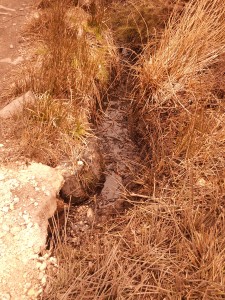 Nice and wide, clear of blockages.

Next stop is the new jumps section under boulder.  On ongoing battle to keep them closed and let them bed in properly has been lost, at least twice.  But the snow seems to have been on our side and that combined with the fact that the first one is pretty scary and discouraging means there’s not much damage.  The loose material is brushed off and we abandon the changes we were going to make, and leave them open.  This is a shame, we could have made them better, we could have got the trail surface to last longer.  But personally, I’m not too fussed for jumps and I’m already thinking about the next section, which is much more my bag.  Rock Gardens!  Or one rock garden, one long rock garden.  Oh yes.  Now this I can get excited about.

But first, a spot of reminiscing if you’ll indulge me.  I first started trail building at Stainburn 3 years ago.  It was a different place back then.  A baron desolated hillside strewn with the remains of recently felled trees.  Almost nothing grew except the odd foxglove, brambles and a smattering of grass.  The Descent line was just a few years old.  Since then I’ve ridden it pretty much monthly so the changes have been gradual and it wasn’t until I stumbled across some videos taken just two years ago that I saw how drastic the changes were and remembered there was not always a stream running down the trail which itself used to be a foot higher!   None of us are really sure exactly when the stream appeared.  It wasn’t constant to begin with, it came and went with the rain that fed it, until on time it just stayed.  We’re pretty sure it was there before last 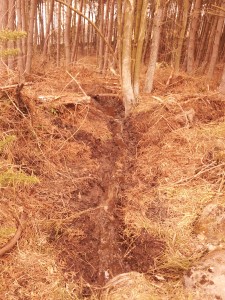 summer, but there can be no doubt last summer did not help, and now this innocuous gentle flow of water, not even enough to be called a babbling brook, has washed away the entire trail surface down to rock.  The lower it got, the more water began to flow into it.  We were faced with a massive task if we wanted to redirect the water and reclaim what was ours.

There did not seem to be the will for it.

So much of our time over the last year has been spent fighting the flow of water, and we are SingletrAction Trailbuilders, not SingletrAction Water Engineers, so instead the decision was made to build an alternative line (any excuse).  Not a replacement for the red, but a Black alternative, all rock, so water would not, could not flow along it, all rock so the rider would have to work to keep their socks dry and all rock to once more up the technical level of the trail (we have a reputation to think of after all).

My first thoughts were that the vegetation would be our biggest challenge here.  No.  the vegetation was an inconvenience but one which was easily conquered once Jeremy and Richard set at it.  No our challenge was a predictable one.  Water. Very soon the guys digging found they were floundering in slop, and shortly after that we realised we had, as we always seem to at Stainburn, found a spring.  This was actually a good thing as once you know where water is coming from you can at least direct it, so we found some pipe, shoved that in, dug some channels and then built the trail back as far the wet patch and covered the whole thing with rock.  So we got 10 metres of the trail built, twice as much cleared and ready, and about 3 tones of rock in the bog which can no settle and firm up for when we return in May.  By the time 4 o’clock came and we were down to 4 trailbuilders, to say nothing of the dog, I was having trouble forming sentences and couldn’t help but notice I was probably a little sunburned too.  The suggestion was made we call it a day, no one opposed the idea. 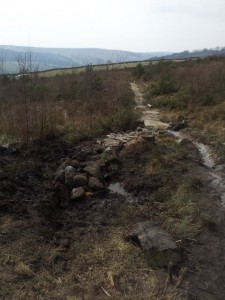 Looking at what we got built it might only be 10 to 15 metres of trail, but it probably has about 15 ton of rock in it as well shifted by the relentlessly energetic and enthusiastic volunteer force we are so often blessed with at Stainburn dig days.  I also had to admit we had at some point forgotten this was to be a technical section and started getting a little bit perfectionist about the rock pitching.  Its hard not to.  But no bother, we’ll just make the next bit really rough to make up for it.  Then people will be glad to reach the smooth section…  assuming, that is, they make it that far.

SingletrAction currently hold regular monthly volunteer Trailbuilding days at Stainburn, Dalby and Guisborough.  No special skills or knowledge is needed and every extra pair of hands helps get the trails built.

We also consult and offer advice to other groups and organisations wanting to build trails or be involved in trailbuilding.

*The trail builders would like to thank those riding Stainburn during that time for respecting the closure of the corner and allowing the surface to settle properly.