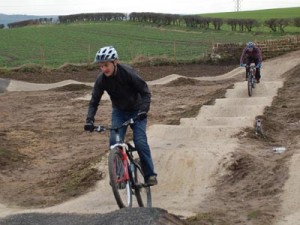 Ok, so maybe calling it a world tour is a teeny bit of an exaggeration, but our plan was a simple one, visit and ride three pump tracks in a day.  After months of planning we had decided on Skelton, Scarborough and our very own Dalby tracks.

I awoke at 5am on Saturday morning like a big kid on Christmas day, excited and eager to see what the day would bring.  Finally the big day had arrived but before I could go anywhere I had one important job to do first….

Put the kettle on and have a brew, after all the entire British Empire was built on cups of tea and I wasn’t going anywhere without one.   With two pints of tea in me I was fuelled up and ready to go.

We all met in York and started loading the bikes into a very handy van.  We had 8 bikes to play on for the day including Tim’s Holeshot that we rescued from him, unfortunately for Tim he wasn’t able to join us but his bike soldiered on and managed to have fun without him.  Sorry Tim.
While the bikes were being loaded into the van Chris gave the Holeshot a test drive, then managed to fall off while messing about.  It would seem from initial reports that Tim’s back brake doesn’t work too well, but never mind nobody was hurt and we weren’t going to need brakes anyway

Once everything was loaded up we headed off in our own little convoy.  Knacker & Ian in the van and  Chris, Nick & Myself in the Mondeo.  We’d took some walkie talkie radios so the convoy could keep in contact and it wasn’t long before everyone was acting like kids messing about with them.

We thought we’d warm up on a bmx track and had been told about one in Redcar which wasn’t too far off our planned route, we followed some directions we’d given but couldn’tfind the track.  Deciding to cut our losses we headed off to Skelton, we didn’t really know exactly wherethe pump track was in Skelton, but we’d seen photos so how hard could it be to find it?

Skelton
It turned out finding the track at Skelton was a little trickier than we thought.  It turns out that Skelton is broken up into four areas, North Skelton, Skelton Green, Old Skelton and New Skelton so we weren’t sure where to look.  We looked around for signs, talked to locals & even tried Google maps on our mobiles but had very little luck.  On a hunch we started driving up the hill looking for a likely spot, Ian had a feeling we should turn right and head further up hill, his feeling was spot on.  We had arrived!

The track was completely deserted when we arrived and we were all like excited children and rushed to get our bikes out and start playing.

Ian was a pump track virgin so being the first track of the day a mini skills session began.  Nick went into coaching mode and passed on wise words of wisdom to Ian on the art of pumping, I helped by demonstrating to Ian what not to do.

Knacker and Chris being seasoned pros started playing straight away and it was obvious they have had lots of experience in pumping.  It wasn’t long before Knacker was suggesting things for Chris to try, who made everything look effortless.  He is very annoying like that…But only because i'm jealous.

A few more laps later and the local kids turned up to see who these old blokes were playing on their patch.  The kids proceeded to show how things get done in Skelton, I do have to say they were pretty good and in a different class to me and Ian.  There was great banter between the locals and our group and everybody had a good laugh, before too long it was time for us to go, but we just had enough time for a few trains around the track which the kids joined in with.

This track seemed to be quite a good all-rounder, even for a newbie to pumping like me.  It had a good mix of lines with simple rollers, small jumps and doubles,  great for someone who wants to build up a bit of confidence and progressing their skills.  I found it a fun and enjoyable track and I think we all agreed that this track had something for just about everyone.  Well worth a play on if you’re in the area, so for all those wanting to visit Here’s the location.

Scarborough
After a Pitstop for lunch we headed off towards Scarborough,  we weren’t sure what to expect with the windy weather on the seafront.  Before long we arrived in scarborough and headed toward the bike park, I think we were all pleased the wind had eased off a bit.

This is a completely different track to Skelton, It wasn’t really a pump track at all, with its much bigger jumps.

Ian continued to progress and started to feel the pump, while my progress stalled.  The bigger jumps really knocked my confidence, I don’t think this track would be to everyones liking, especially those lacking confidence.  We did a little swap of bikes and Ian fell in love with Knackers bike while I fell in love with Tim’s Holeshot…. That sounds a bit wrong doesn’t it?  I felt much happier on Tim’s bike and the track seemed to make a little more sense.

An hour went by, the wind picked up and everyone started to feel the cold, we decided to push on to Dalby but before we could do that we needed to make a quick stop and get some donuts.  No trip to Scarborough would be complete without getting some and they were just what we all needed.

Dalby
Anyone who has ever been to a trail building day will understand what It’s like to ride something you’ve helped build.  All of us have put many an hour into the pump track at Dalby, so we have all waited a long time to allow the track to settle in before we could finally get a chance to have a play.  The moment had finally arrived. 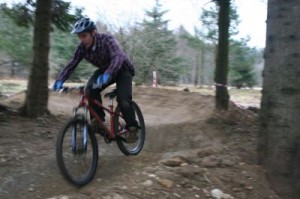 We all in turn did a lap, analysed, then did a second lap.  By now it was clear that all Nicks coaching had started to make sense to Ian, who just kept going and going like the Duracell Bunny.

Between laps we talked about what we thought about the track, it was clear that we all thought the same thing, it is good but needs a few tweeks.  We now know what works and what doesn’t and will start making alterations in the next few trail building days.  Well done to all involved in putting this track together.

As the day drew to a close Nick and Ian had a play in dixons hollow, I continued trying to feel the pump and Chris and Knacker went to play on the skinnies because it’s the first time they’ve ever been dry!

At the end of the day we all had fun even though we were all knackered, especially knacker who after riding the skinnies was walking back up to dixons hollow and put his foot down on a rock and rolled over on his ankle (numpty) after messing about all day and falls over walking!!!

A grand day out.